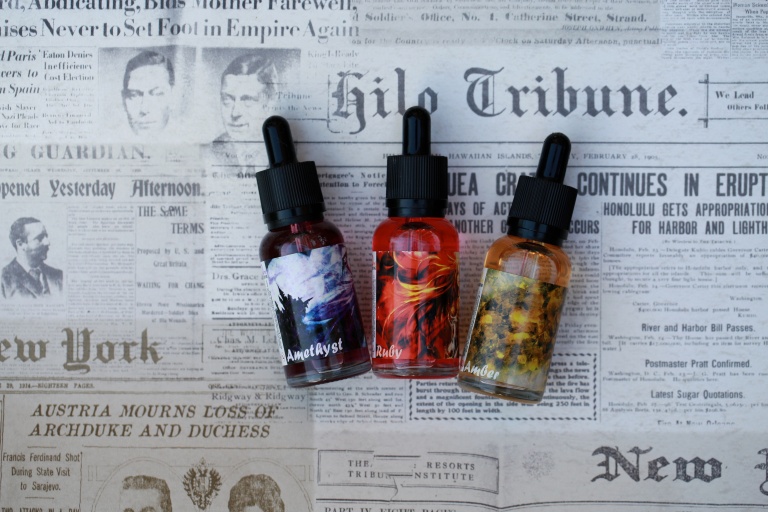 I’d never heard of Fresh Mist before until I was contacted by Dean and asked if I would be interested in collaborating with them, of course. I said yes – I always jump at the chance to try new liquid because theres so many good brands out there that I wouldn’t necessarily come across normally and this way I get to share them with you guys too. As you can see from the picture, I was sent 3 x30ml which was very generous of them and I’m gonna run you through each one in no particular order. (Actually, Im gonna go from light to dark).

I’m actually going to start this by saying, if you aren’t a fan of fruit flavours which have a cool menthol toned kick to them then these probably aren’t going to be for you. If you do like that kinda stuff, keep reading.

My favourite from the lot I think, I can tell because I’ve used the most of this one in comparison to the other two. It’s a really well balanced mix of flavours with the menthol first becoming detectable quite early on, it leads to a cool blueberry vape. If i’m honest, the orange is pretty hard for me to detect although it does show its face every now and again. But blueberry and the menthol are definitely the predominant flavours in this.

This is a bit of a mixed bag for me. It’s not that I don’t like it, because I do. I just find myself not being able to vape it for long at a time. I’m like that with all aniseed/menthol vapes though so its nothing personal against Ruby. In my opinion this is much more cooling than Amber but it does not over power the other flavours. I’m sure I can taste blackberries and strawberries in there somewhere, amongst other flavours which I can’t quite put my finger on. There is the aniseed from the fennel but there is certainly a minty undertone aswell. Very enjoyable (If you like aniseed).

This one actually reminds me of like a minty fruit cake which actually sounds horrific when worded like that but its the best way I can describe it. It’s not horrific, it’s really good actually. The fruit cake bit is coming from the currants that you can really taste and the menthol is a really nice accompaniment to it, even though I’m sure you’ve never munched currants followed by a mint imperial. Its really good. Infant, now I’m writing this, and going over the flavours again. I think this one may actually be my favourite, lets put this and Amber as my favourite with Ruby coming a close 2nd. The menthol/aniseed notes really build throughout the whole vape and your mouth is left feeling a really good level of mint and fruit. Mmm.

This is part of the cloud chasing range and is therefore all 80VG which is nice. Companies really seem to be making the shift to higher VG juices which is good and anything less than 70VG is a bit of a disappointment in my eyes. All these flavours are pretty good, especially if you need to give your tastebuds a bit of a kick because you normally vape straight fruit blends. They retail on the FreshMist website for £12.99 for 30ml which is very reasonable in my opinion. I’d recommend you go and take a look around their site, there is plenty to spend your money on and juice to suit everyone!